Station 119: From Lifesaving to Marine Research 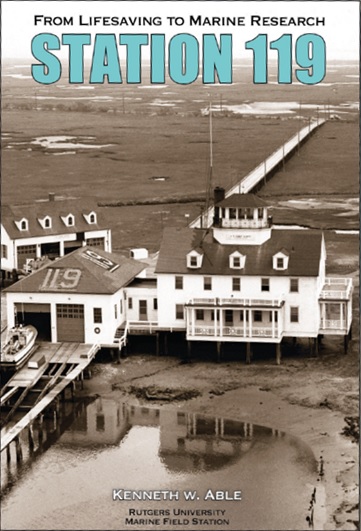 “The Rutgers University Marine Field Station’s southern New Jersey location is ideally located between two large ocean water masses, the Labrador Current from the north and the Gulf Stream from the south, giving it access to a large variety of larvae. From the north, cod, rockling and Atlantic herring are common. From the south come Atlantic croaker, silver perch and even an occasional tarpon or ladyfish, which may have been spawned as far away as the east coast of Florida, or maybe even Cuba. Even more extreme in distance traveled are the larvae of American eels, which spawn in the Sargasso Sea. Of course, a large number of locally spawned fish — bay anchovy, Atlantic silversides and gobies — are also collected and studied. All of these pass under the bridge over Little Sheepshead Creek on Great Bay Boulevard at some point during the year.

“Over the years the old Coast Guard Station behind Little Egg Inlet in southern New Jersey has been a source of mystery, in large part because of its incompletely known history. This story begins before the construction of the present facility in 1937. What occurred in the late 1880s and early 1900s help to explain the reasons for its location, its demise as a federal facility and its birth as a university research center.”

“A must-read for anyone interested in New Jersey maritime history! As a maritime historian and founder of the New Jersey Maritime Museum, I found this book to be an excellent record of events surrounding the history of this station. Sadly, not enough is being done to preserve New Jersey’s rich maritime history, but Ken Able’s well written story of the Rutgers University Marine Field Station is a step in the right direction. Looking forward to reading more from this author!” – Deborah C. Whitcraft

More information on Station 119, including an expanded bibliography can be found here. Click here to purchase a copy of Station 119 directly from the publisher! 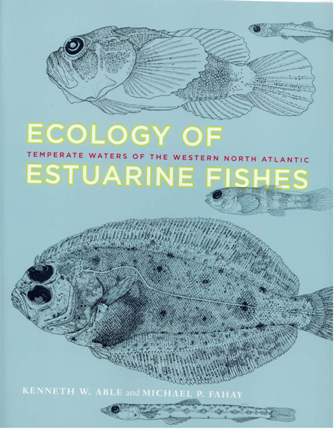 This comprehensive refernce book details the life history and ecology of the fish species that occupy the estuarine and coastal habitats along much of the eastern United States. The life history and ecology of fishes in estuaries is poorly know realtive to the interest and needs of ichthyologists, estuarine ecologists, pollution biologists and resource managers at local, state and federal levels. Also, it is while they are in estuaries that they encounter several critical “bottlenecks” that can greatly affect survival rates and the resulting abundance of certain populations that we wish to harvest or are important components of these ecosytems. We intend to provide this missing information in a data-rich synthesis based on both historical and new information from a variety of sources embracing both temperate estuaries and the adjacent Atlantic Ocean where many of these species are spawned and spend the winter. This monograph will comprehensively treat the how, when , and why of the dominant fishes in estuaries. Synthesis chapters summarizing the patterns of reproduction and developement, larval supply, settlement, growth, mortality, habitat use and migrations will be foci for 94 species. “No one else could have written this book. I am amazed by the depth and range of knowledge demonstrated. This synthesis is a major contribution to estuarine fish studies.”-Dave Secor, University of Maryland Center for Environmental Science

Able, K.W. and M.P. Fahay. 1998. The First Year in the Life of Estuarine Fishes in the Middle Atlantic Bight. Rutgers University Press. 342 p. 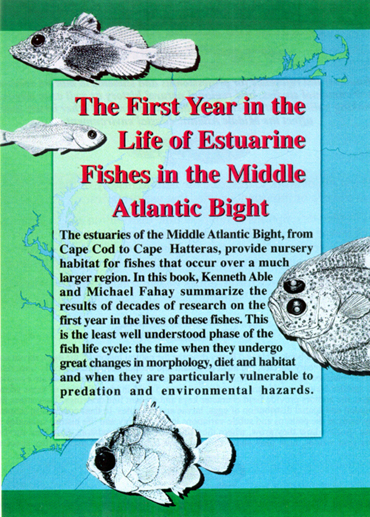 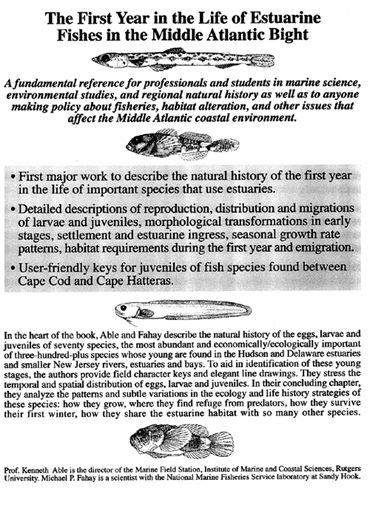